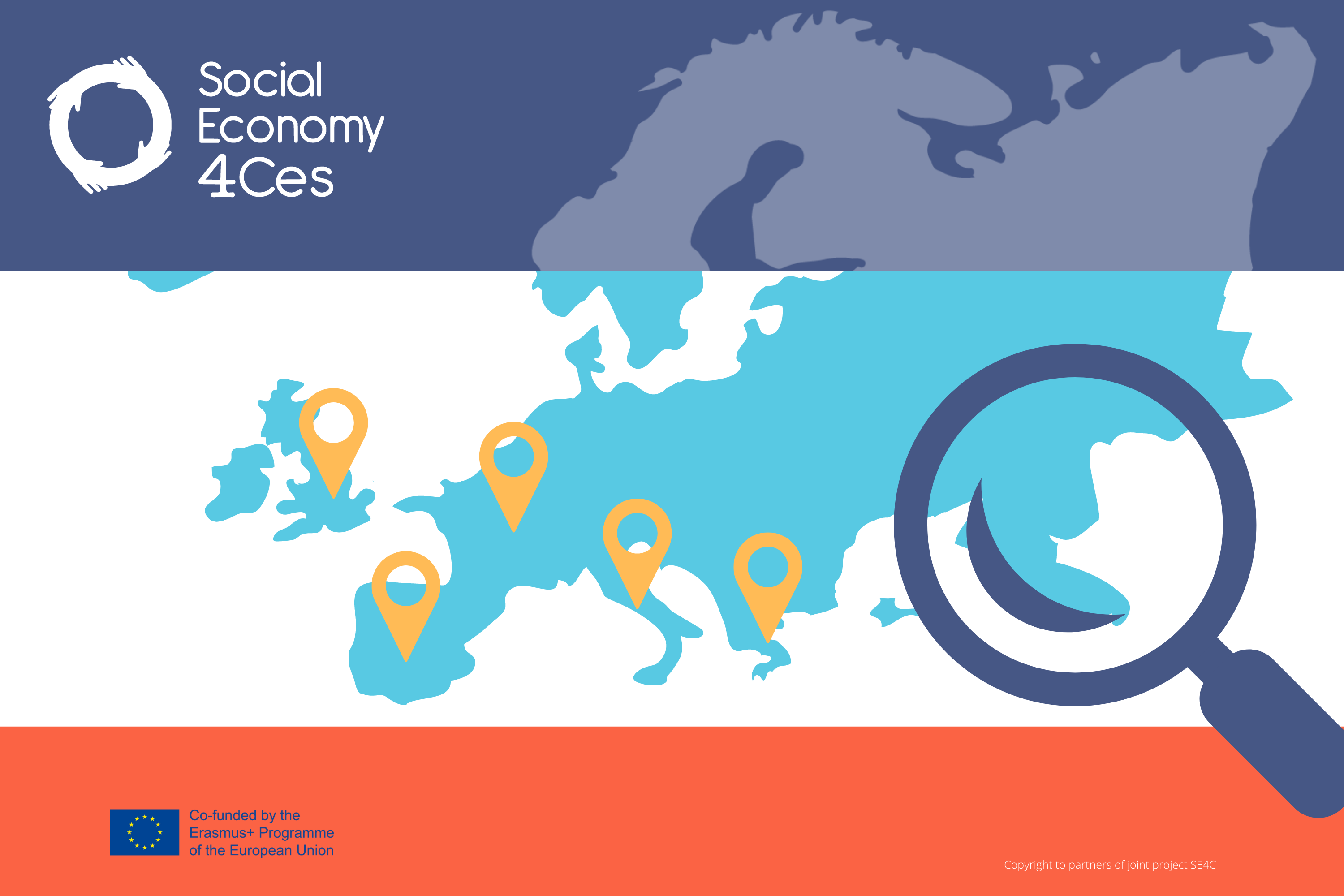 The country reports seek to analyse the current state-of-the-art in partner countries in relation to the existing level of participation of SE organisations in teaching and in the co-creation of academic knowledge as a way to offer a pragmatic aspect by actors that implement SE approaches on the ground.

Social Economy education in the United Kingdom: ‘It should be in the DNA of all modules, in all disciplines’

Although there are many short courses on the SE, there is a shortage of HE programmes. But actors across the sectors are demanding Higher education provisions as well as stronger collaboration between Universities and SE organisations.

‘We need programmes designed to bring new, talented, people inside the cooperative sector.’

Despite the apparent difficulties to define social economy in the UK context and the variations across those self-identified as SE actors, there is a general emphasis on the ends pursued (emphasis on social mission) and a set of common values and principles underpinning organisations operating within the wider social economy sector. Universities need to strengthen their collaboration with SE actors; encourage critical thinking, nurture cultural awareness and support ethnic minority groups. There is a strong desire to extend collaborations between HE institutions and SE actors, yet we need to be mindful of existing scarcity of resources. Designing theoretically rigorous and practice-oriented programmes is in high demand. Finding the right balance between theory and practice is certainly a challenge, yet understanding the complexity of organisations operating in the wider social economy sector and helping graduates develop a range of skills and competencies alongside the cultivation of a distinctive, cooperative-driven and community-based, ethos is highly rated. Redefining ‘how people work and produce value’ and helping to ‘change the way that the economy works’, was considered to be among the top priorities of Universities and any programme related to social economy education.

Find the country report for the UK here.

Social and Solidarity Economy education in France: Strong HE provisions but the collaboration between HE and SE actors could be developed

France has a long history and tradition in the social economy, and the 2014 law has revitalised its influence and strongly contributed to the current institutionalisation of the sector bringing different forms of social organisations under one banner and setting the principles and criteria guiding it. This is also evident in the existing higher educational provisions in the country under the RIUESS network with over 20 UG courses, 40 PG courses and 19 ‘other’ courses available, perhaps the largest offering of social and solidarity programmes in Europe. All programmes have an explicit focus on social and solidarity economy offering a fine balance between theoretically rigorousness and practical skills. Programmes are modular over 1 or 2 years with the majority of them involving some period of work experience/internship aiming to help students acquire work experience and establish networks. Collaborations, particularly in the delivery of programmes, with SE actors is encouraged, yet is less clear from our findings whether these collaborations extend to the designing of the programmes too.

Social and solidarity economy education in Greece: Limited collaboration between HEIs and the field of SE

Social Economy (SE) was reinvigorated in Greece rather recently (after the 2008 financial crisis). As a result, there are still few SE educational programs in the country. These involve a large-scale postgraduate program on social and solidarity economy (SSE) with more than 700 students, individual courses / modules on SE issues and four integrated programs on SE organized by civil society endeavors. The educational programs share an interdisciplinary approach on SE and strongly promote SE principles such as democracy, equity, cooperation and community development. Nevertheless, what is still missing from the HEIs’ programs is focus on the underpinning ideologies and epistemologies under which SE can thrive, since some of the students find it difficult to place the different theories on a broader narrative. Even more importantly, there is also a lack of focus on the everyday needs of the SE sector in general.

“Sometimes the needs of the SE sector are not reflected in theories formed 20 or 30 years ago, no matter how good these theories are, so it would be useful to interact with the field of SE”.

SE organizations believe that they would benefit from educational programs giving emphasis both on technical/hard skills and competences connected to their field of activity, as well as on the SE in general (e.g. management skills, advocacy skills, creativity). HEIs could enhance their educational programs on SE by involving SE organisations/practitioners in conducting educational events (e.g. summer schools, festivals for acquaintances and training) as well as in teaching and organising on-site visits, case studies and internships.

he analysis carried out in Italy by the University of Bologna and AICCON highlights a gap in the national higher education system, which is not properly  suitable to prepare students to work in the social economy sector and to give them knowledge and competences to face the current societal challenges. This emerged from a background analysis and one to one interviews with different actors, which also underlined that Italian universities are not engaging social economy stakeholders in the co-design of the educational offer. In the long run, the lack of adequate training results in a loss of the transforming potential of the social economy field. As a consequence, there is a strong need for universities to cooperate with social economy organizations by co-developing curricula and educational material, by running student mentoring programmes, or implementing participatory teaching methods during classes. New forms of collaboration will strengthen HEIs in understanding the needs of the social economy sector and in supporting its actions in society. Also, HEIs will actively involve students in co-designing their academic paths and will empower them through skills development.

Social and solidarity economy education in Spain: a flourishing SE reflected in the field of education.

Spain has a very long tradition of social economy (SE), cooperativism, and community economies. Especially in specific territories (e.g. the Basque Country or Catalunia), one can encounter a very wide network of products and services that are being produced and distributed by SE entities (including housing, health, transportation, agricultural production, and childcaring). This flourishing of SE in the country is also reflected in the field of education. In Spain, a potential candidate can choose among a vast array of undergraduate and post-graduate educational programmes aiming to cover different aspects of SE. Some of them are more research-oriented while others aim directly at offering specialized professional skills to their students. Experiential learning, regular connections between universities and SE entities, and a series of customizable options for the students are part and parcel of the overall effort that is taking place to enhance SE and cooperativism in the country. Yet not all the educational programmes that are reviewed here present the same degree of novelty in their educational methods and opportunities they offer. Due to the recent introduction of online modules and opportunities, the majority of the universities that offer SE educational programmes have managed to expand their outreach capacity and establish strong international connections, especially with the Latin American countries. Social Economy entities themselves (especially the umbrella organizations such as REAS, CIRIEC etc.) play an important role in transferring knowledge and offering real-life experiences to the students across the country while, at the same time, participate in the incipient effort to co-create and strengthen SE education in Spain.

“Sometimes the needs of the SE sector are not reflected in theories formed 20 or 30 years ago, no matter how good these theories are, so it would be useful to interact with the field of SE”.

SE organizations believe that they would benefit from educational programs giving emphasis both on technical/hard skills and competences connected to their field of activity, as well as on the SE in general (e.g. management skills, advocacy skills, creativity). HEIs could enhance their educational programs on SE by involving SE organisations/practitioners in conducting educational events (e.g. summer schools, festivals for acquaintances and training) as well as in teaching and organising on-site visits, case studies and internships.

Find the synthesis report of the five country reports here.